International travel is the essential ingredient to ensuring the aviation, tourism, and energy industries recover from the pandemic, but the revival in global travel has been weaker than expected and could signal a slower return to economic vitality, according to an expert roundtable hosted by the International Energy Forum (IEF).

The IEF virtual roundtable – Focus on the Energy, Aviation, Tourism Nexus on 8 October 2020  – explored the impact of COVID-19 on these closely related industries, and how the recovery of these sectors could make the largest contribution to restoring economic growth and employment globally.

"This is the most challenging period tourism has faced in its history," says Zurab Pololikashvili, Secretary General of the United Nations World Tourism Organization. "The surest way of bringing confidence back is to get everyone working together. This means governments working together and more cooperation between the public and private sectors than ever before."

These sectors are particularly interdependent. What influences tourism naturally touches aviation and travel, which in turn has implications for the energy sector. In fact, all three industries have been increasingly converging as autonomous but coupled peers, sharing much the same eco-system during the COVID-19 pandemic.

"Energy, aviation, and tourism have been among the hardest hit industries, but their recovery stands to make the largest contribution to reestablish economic growth," says Joseph McMonigle, Secretary General of the IEF. "Their fates are inextricably entwined as we consider our best way forward."

Even working together across industries, the facts of the pandemic and its aftershocks may delay the revival of the tourism industry and the resulting resurgence of the aviation and energy industries. The coronavirus pandemic has already resulted in five times the loss in international tourism receipts than the shortfalls that stemmed from the 2009 global economic crisis.

"I am presupposing we will not have a vaccine to save next year (2021)," said His Excellency Harry Theoharis, Minister of Tourism for Greece. "For 2021, we should be working the assumption that the vaccine will be operable and make a difference sometime in the year, but it will not be soon enough to save the year in its entirety. The effects of the crisis will be felt for the next three to five years."

The numbers reflect that assessment. The tourism sector is expected to see losses of 1 trillion in US dollars and 100 million jobs worldwide. If tourism's revival is slowed, as it looks like it will be, the global GDP could decline between 1.5 and 2.8 percent. The International Civil Aviation Organization (ICAO) says lost revenues to airlines through August was $250 billion and likely will approach $500 billion by the end of 2020. In the aviation and energy sectors, job losses are likely to surpass half a million. These numbers are dwarfed by the more than 100 million jobs threatened in tourism. Restrictions on travel keep the sector from sharing prosperity across world regions and limit options for an inclusive recovery.

Steve Sear, President of Delta Airlines International, said the airline industry has been trying to rebuild public confidence in the safety of air travel as the virus has receded in various countries. Delta alone has already implemented 200 major safety initiatives, including creating a new position—the vice president of global cleanliness.

"It's going to be a multi-year process of recovery," said Mr. Sear. "It will be choppy and slow. Everybody is working to put safety protocols in place to make sure the entire journey is going to be safe, and to enable us to get our customers confident about traveling again."

Righting the weakened tourism industry comes first, said Minister Theoharis. To accelerate the revival, countries must work to make the recovery safe and lasting. To do so, he recommends a common strategy for reopening: removing country travel bans and quarantines; stimulating tourism demand on a government-by-government level; investing further in research into a vaccine; and boosting spending for sustainable tourism projects to build new customers for the future. 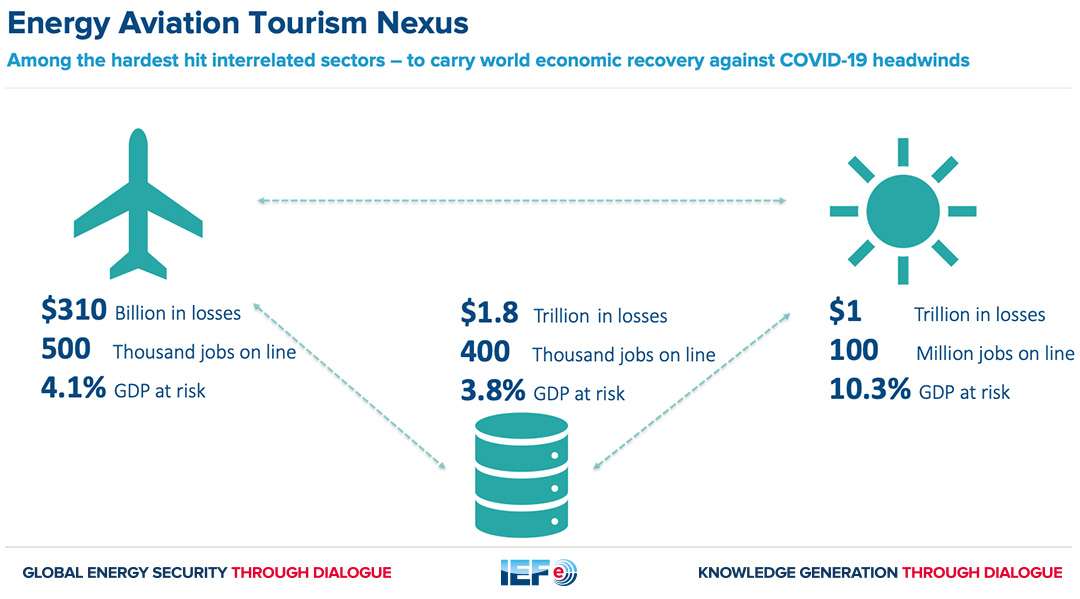 "We are lucky in one sense," said Minister Theoharis. "The tourism industry is a product that cannot be transferred to the virtual world."

Secretary General Pololikashvili seconded the notion that how countries respond to COVID-19 will be key to the successful transition out of the pandemic for the tourism economy. Travel restrictions by individual countries undermine the sense of recovery worldwide. He noted that the global tourism crisis also opens up additional avenues for the aviation, tourism, and energy industries to recover in a sustainable fashion.

For the airline industry, the road ahead won't be easy. The focus will be on risk mitigation and rebuilding the confidence of consumers, Mr. Sear said. That includes applying social distancing to the process by keeping middle seats open; using electrostatic spraying and other cleaning protocols to increase safety; requiring temperature checks and multiple test options for employees; and installing hospital-style hepa filers in cabin air systems. None of the actions are particularly profitable, he added.

"We're a customer- and people-oriented business that won't change," said Mr. Sear. "We're going to be a little bit smaller, but we're going to make sure we get through this. Thinking long term, we're pretty bullish, but thinking short term, it's brutal. We just have to be persistent."

The challenges ahead for the energy industry are significant. While demand is the short term immediate obstacle to a full recovery for oil markets, the most worrisome impact is on supply, according to Ann-Louise Hittle, Vice President, Oils Research at Wood Mackenzie.

Demand comes back in particular for middle distillates, gasoline, and petrochemical feed stocks. It is expected to be up about 5 million barrels a day, compared to the 9 million drop this year, but that's still not near 2019 levels.

"Demand going forward lags our forecast for total demand," Ms. Hittle says. "It catches up though in 2030 [in terms of] global demand growth to where we were before the pandemic. It's still globally on target, but we see it slowing the next decade."

Ms. Hittle said global supply, however, takes far longer to return to normal. OPEC-plus producers have cut supply production in response to the sharp drop in demand caused by the pandemic. But supply has been further impacted by the entire upstream sector cutting investments and deferring project expansions. As a result, global supply likely won't get back to pre-COVID-19 levels until 2035 or 2040, she said.

On the demand side, Ms. Hittle sees a strong recovery in China. Due to the pandemic, oil demand dropped by 400,000 barrels a day this year. But next year, she and other analysts expect to see demand rebound by 1.3 million barrels a day, although the driver of that will be domestic travel. Experts don't expect to see China go back to 2019 levels until 2023, said Ms. Hittle.

"I think in the short term what we're trying to grapple with is the second wave of COVID-19 impacts this winter," said Joanne Shore, President of Downstream Petroleum Markets in the U.S. "That is a near-term uncertainty for all fuels but jet fuel in particular."

Ms. Shore noted that refiners faced some interesting challenges with the unprecedented drop in demand. Demand dropped very quickly, and the product mix changed. As a result, there was a large drop in refinery utilization. The reduction in crude runs reduced everything going through the refinery. There was a problem in terms of product mix, she noted.

"As demand began to shift, the yields at the refineries began to shift, too," said Ms. Shore. "Those are very large yield shifts for a refining system to go through. The refining [industry] like the airline industry and many other industries during this period has been rationalizing more quickly than they would have been doing in the past. We are seeing some changes there. They did the same things that other industries did. They cut back on capital expenditures and controlled operating expenses."

These forecasts reflect IEF's own assessments as well. The IEF believes jet fuel demand could recover by 25 percent—an increase of about 2 million barrels a day—but it will depend on a vaccine being distributed in early 2021, the widespread adoption of new tourism policy guidelines and regulations recommended by the United Nations World Tourism Organization (UNWTO) and the Organisation for Economic Co-operation and Development (OECD); and an ongoing commitment by the airlines to lead on safety measures.

"There is still a great deal unknown about the pandemic and its impacts. We don't have a good handle on the demand part of this," said Secretary General McMonigle. "I do think there could be pent up demand. I am worried that when the demand comes back, it may be swift. For oil markets, it would be hard to catch up and it could create some price issues in the next couple years."